Now we are going to discuss about armature winding in details. Before going through this section, we

The pole pitch is defined as the peripheral distance between centers of two adjacent poles in DC machine.

pole centers. Pole Pitch is naturally equal to the total number of armature slots divided by the number of

poles in the machine.

If there are 96 slots on the armature periphery and 4 numbers of poles in the machine, the numbers of

armature slots come between two adjacent poles centre’s would be 96/4 = 24. Hence, the pole pitch of

that DC machine would be 24.

poles, we alternatively refer it as armature slots per pole.

turn or a single loop of conductor, it is called single turn coil. If the coil is made up of more than one turn

of a conductor, we refer it as a multi-turn coil. A single turn coil will have one conductor per side of the

coil whereas, in multi turns coil, there will be multiple conductors per side of the coil. Whatever may be

the number of conductors per side of the coil, each coil side is placed inside one armature slot only. That

means all conductors of one side of a particular coil must be placed in one single slot only. Similarly, we

place all conductors of opposite side of the coil in another single armature slot.

Coil span is defined as the peripheral distance between two sides of a coil, measured in term of the

number of armature slots between them. That means, after placing one side of the coil in a particular slot,

after how many conjugative slots, the other side of the same coil is placed on the armature. This number

is known as coil span.

If the coil span is equal to the pole pitch, then the armature winding is said to be full – pitched. In this

phase shift with emf induced in the other side of the coil. Thus, the total terminal

voltage of the coil will be nothing but the direct arithmetic sum of these two emfs. If the coil span is less

than the pole pitch, then the winding is referred as fractional pitched. In this coil, there will be a phase

difference between induced emf in two sides, less than 1800

. Hence resultant terminal voltage of the coil is

vector sum of these two emf’s and it is less than that of full-pitched coil.

In practice, coil pitch (or Span) as low as eight tenth of a Pole Pitch, is employed without much serious

reduction in emf. Fractional pitched windings are purposely used to effect substantial saving in copper of

the end connection and for improving commutation. 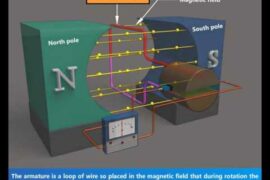 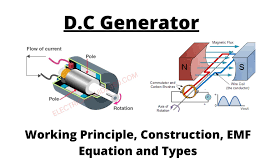 Principle of Operation of a D.C. Generator