In this user guide, we’ll use the Blynk application on our cellphones to control the output of the ESP32. We’ll demonstrate yet another helpful application that allows us to control any output linked to the ESP32’s GPIO pins.For the objectives of this post, we’ll use the Arduino IDE to control an LED linked to an output GPIO of our ESP32 module. The LED will be turned on and off using two-way communication between the ESP32 board and the Blynk project that you will construct using the app. After that, controlling the output of any other ESP32 module will be relatively simple. The buzzer, relay, motors, and other devices can also be controlled.

Blynk is a highly accessible smartphone application that works on both Android and iOS devices. It is an interactive dashboard where users may place components to create their own IoT projects. As a result, a mobile app will be created that allows the user to operate microcontrollers connected via WIFI. LEDs, relays, electric motors, and a variety of other devices can be controlled. Blynk does not require any internal programming to develop your app. It’s as simple as dragging and dropping your electronic components into place. As a result, using Blynk to construct your IoT projects is really simple and involves very little work.

Installing and Getting Ready

We will use an Android smartphone for this project. So go to Google Play or Apple Store.

At the top, you will find three icons. These are for Project settings, editing and play button.

Inside the play button, you can also find the stop button.

We will use Arduino IDE to program our ESP32 development board. Thus, you should have the latest version of Arduino IDE. Additionally, you also need to install the ESP32 plugin.

To use the Blynk app with our ESP32 board, we would have to install its library.

You have to go to Sketch > Include Library > Add .zip Library inside the IDE to add the library as well. After installation of the library, restart your IDE.

Open your Arduino IDE and go to File > New to open a new file. Copy the code given below in that file. You need to enter your network credentials. Additionally, you also have to provide your Authorization key which you obtained from the Blynk app.

To begin, we’ll incorporate all of the necessary libraries for this project. The WiFi.h library will assist in connecting the ESP32 module to a wireless network. The libraries for the Blynk application functionality will also be included.

Then, we will define the variable of data type int called ‘led_gpio’. It will save the GPIO pin through which we will connect our LED. We are using GPIO25 in our case. Make sure to enter the same GPIO pin in the program code which you saved when creating the button in the Blynk app. Thus, we will control this pin through the app.

Thirdly, we will define the authorization key which was emailed to us through Blynk in our account through which we logged in. Keep this key safe with you for security concerns.

Inside the setup() function, we will open a serial connection at a baud rate of 115200.

By using the pinMode() function, the ‘led_gpio’ variable (GPIO25) will be passed as a parameter inside the function. This will configure the pin as an output.

The following section of code will connect our ESP32 board with the local network whose network credentials we already specified above. We will use the WiFi.begin() function. The arguments will be the SSID and the password which we defined earlier in the code.

We’ll now use the Blynk.begin() function to link our ESP32 module to the Blynk app. It considers three variables. The permission key is the first. The SSID is the second element, while the WIFI password is the third. All three of these were defined in the programme code before. A successful connection will be formed using the right credentials.

Inside the loop function we will use the Blynk.run() command to keep the connection running.

We were able to control our ESP32 module’s output by creating a mobile app in Blynk. We controlled an LED connected to a pin configured as an output. 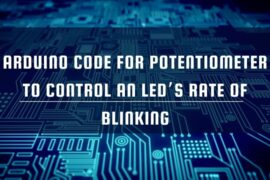 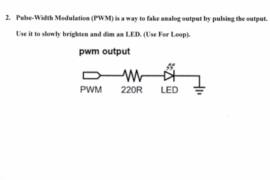 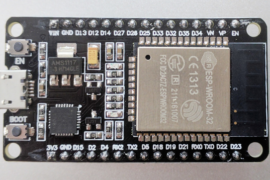