Esp8266 is a microcontroller board with a built-in wifi module, it’s great for making IoT and Home automation projects. This article is starting guide for you to learn more about the Esp8266 and how to use it.

About the Esp8266 Wifi Based microcontroller

Esp8266 wifi-based microcontroller is available at the cost of 4 $ to 10$ in the online market. Like Arduino-based development boards, this also allows controlling input and output functions. The major advantage of Esp8266 over Arduino is it has build-in wifi modules that make it able to connect with the internet and make cool IoT based products

If you were interested to create any project on esp8266, we recommend you to follow this guide completely.

Comparing the esp8266 with the available wifi solutions in the market, it’s a great option for anyone interested in making cool Internet of things-based projects at home or office. It’s costing a few dollars and is easy to integrate with any project very easily.

Esp8266 wifi module-based microcontroller comes in a wide variety of versions as shown in the above figure.ESP-12E or Nodemcu is the popular and the most commonly used ESp8266 based development board. We highly recommend the makers to use the NodeMCU kit, it’s one with a Built-in programmer and lots of GPIO. Thee BUilt in programmer board help to upload the program easy to the microcontroller

The most widely used ESP8266 development boards are the ESP-01, NodeMCU Kit, and the Wemos D1 Mini. We’ll show you the pinout for those boards. If you’re using another development board for project works, make sure you have the right pinout configurations

Programming the ESP development board

There are several ways to program the esp8266 development boards, Commonly uses Arduino IDE for uploading the program.

Get Started with Arduino IDE and ESP8266-Nodemcu 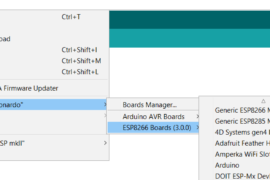 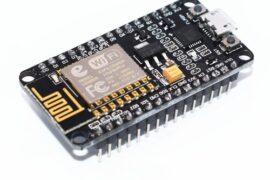