Previously we learned how to blink an LED using delays infinitely but this time we will be performing this function using timers instead. Timers are more efficient than using the sleep function because they are not blocking functions as opposed to the latter. A blocking function stops the program from performing any task until the previous one is completed.

For example, the sleep() function, when we call sleep(2), our program stops at this line for 2 seconds, and thus it acts as a blocking function. This is not the case for Timers. To perform multiple tasks at once we prefer to use timers and should avoid using delays because they slow down the process.

Where to use Timers?

Timers available in Raspberry Pi Pico can be used to perform a certain task periodically after a certain amount of time. For example, we can use a timer interrupt to toggle the LED after every one second. Like interrupt handler routines, when a timer interrupts occurs, it stops the sequential execution of the program and performs a task that is attached to a respective time interrupt. After completing the interrupt service routine, the program returns to the next instruction from where it left off.

How to use Raspberry Pi Pico Timers MicroPython Library

Create a timer class instance with an object name after that. The timer class object can be given any illustrative name, such as “timer.” The ID of the timer that we want to use is the input argument to the timer() method. For instance, the ID will be -1 if we want to use a virtual timer. If not, you can use the Raspberry Pi Pico’s lone hardware timer by leaving the ID field empty.

The timer is then initialized in the following way. The Timer() function has three arguments namely:

We have set the period as 5000ms which means 5 seconds. The mode chosen is periodic and the callback function is the print command so this timer will print ‘Welcome to Microcontrollerslab’ after every 5 seconds.

Previously we had to use an infinite loop to delay the led or check for a button press. Through a timer, the same result will be achieved while also freeing room for other processes to run. Now we will see a demonstration of how to blink a Led using timer interrupt.

You will need the following components:

We will connect all the components as we did before in our blinking-led tutorial. Below is a connection diagram for our board.

An LED is connected between GPIO14 through a resistor at the anode pin and ground at the cathode pin. As seen above we have chosen GPIO14 as output for Raspberry Pi Pico although any suitable output GPIO pin can be connected as well. It is your own choice.

Copy and Save the following code in your main.py to your Raspberry Pi Pico board.

Next, we initialize the ‘led’ as an output on GPIO14 and set its value to zero meaning it is OFF.

Then we create a timer object and set its id to -1. This indicates that it is a virtual timer.

The next line initializes the timer’s 3 parameters:

The first parameter is the period which the timer takes in executing the call back function. This is set to 1000ms.

The second parameter is set to ‘Periodic’ which means the timer will execute the callback continuously once every period.

The third parameter callback is set to a function that will run after every period. In this case, we set it to a lambda function that toggles the led. 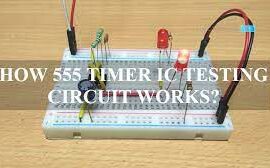